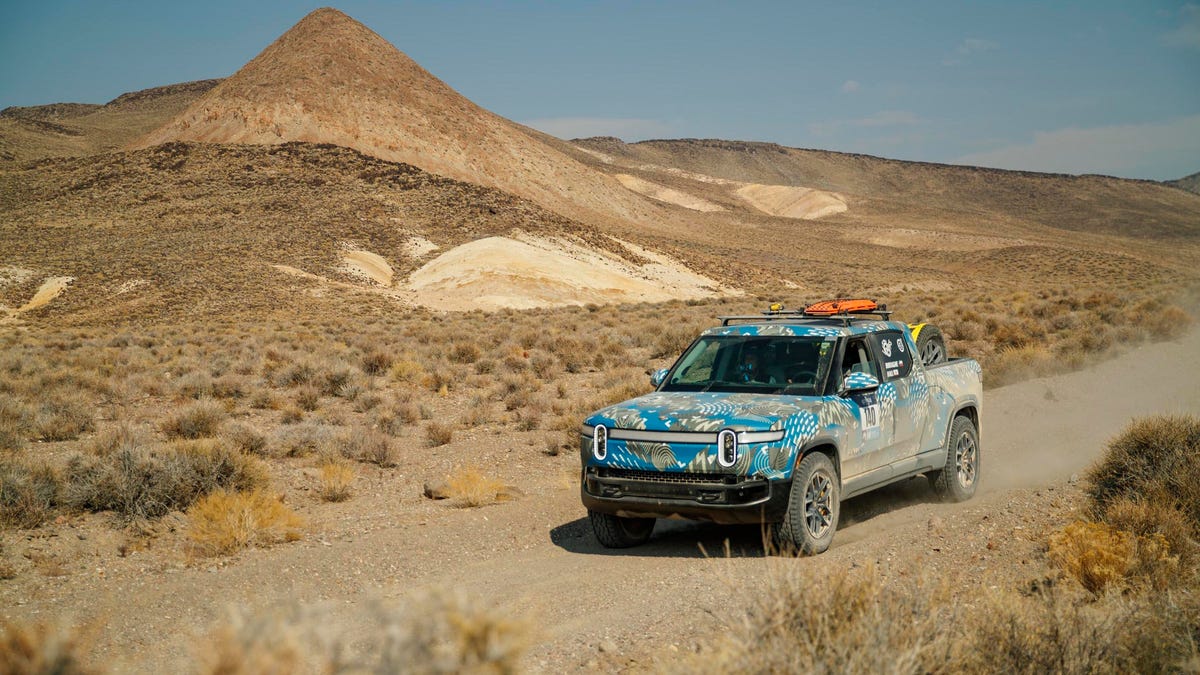 2021 Rivian R1T first drive review: It's going to be a game-changer

After a grueling eight-day off-road test, I can wholeheartedly say the electric Rivian R1T is the real deal.

The all-electric Rivian R1T is like no other truck out there. And while most buyers will likely spend the majority of their time on paved roads, Rivian makes no bones about the fact that the R1T is a serious off-road machine. So what better way to test that claim than to take it on an eight-day, absolutely grueling off-road excursion through some of America's toughest terrain?

With a 135.8-inch wheelbase and an overall length of 217.1 inches, the R1T has a larger footprint than a midsize Ford Ranger but is still a fair bit smaller than a full-size Ford F-150. Think of it as an upper-midsize truck, kind of like a Jeep Gladiator.

When the R1T enters production in June 2021, Rivian will have three battery sizes. The largest 180-kilowatt-hour battery will provide a range of around 400 miles while the smaller 135-kWh battery should be good for about 300. There will be an even smaller base option, which I'm told will offer around 240 miles.

The battery sends juice to four electric motors, arranged in side-by-side pairs at each axle. These motors individually power the four wheels and can bust out as much as 754 horsepower and 826 pound-feet of torque. Yes, the Rivian R1T can also do tank turns, but my preproduction test truck doesn't have that software turned on just yet.

This truck is already pretty portly at 5,886 pounds. But I'm on a week-long off-road excursion with two spare wheels/tires, a floor jack, tool box, some spare parts, 5 liters of water, Maxtrax recovery boards, some Bubba Rope and enough camping gear for two people. All told, my Rivian is laden with an extra 600-ish pounds.

I've never driven an off-road vehicle with regenerative braking and it's really tough to get used to. My pre-production truck has enough regen programmed in that I can do one-pedal driving most of the time, and over the course of a week, I can count on one hand the number of times I actually dig into the mechanical brakes. Like other EVs with strong regen, lifting off the throttle will slow the Rivian to a complete stop, and this really helps to quickly scrub off speed when approaching whoops or rocks out on the trails.

My truck has the 135-kWh battery, but that 300-mile range isn't even a question out here in the desert. Unladen on smooth pavement in perfect temperatures, sure, it might be doable, but out in the middle of nowhere, with lots of extra weight and aerodynamically unfriendly add-ons, I'm averaging roughly 137 miles per charge.

But man, never in my life have I been so concerned about conservation. I sacrifice a bit of ride quality and comfort for the sake of overall range, keeping the 34-inch Pirelli Scorpion tires at 38 psi for less rolling resistance in the hard-packed dirt, even though lower pressure would be easier on my spine. I also choose to leave the climate control turned off, simply to keep all of the available electrons focused on pushing me forward. I even put up with this during some days where the temperature crests 100 degrees Fahrenheit. By the end of the trip, let's just say I'm not the freshest of flowers.

Fortunately, there are times when I can use gravity to my advantage. On a number of downhill sections, I put the truck in Neutral and allow it to coast -- free range, baby. Once the truck gets up to higher speeds I can drop it into Drive and tap the brakes to put some regenerative energy back into the battery. On one instance, I'm able to feed 19 miles worth of range back into the 135-kWh battery. On another stint, I recapture 10 miles. Going over the 17-mile-long Monitor Pass in the eastern Sierra Nevada mountains only ends up costing me 8.6 miles of actual range. Sweet.

The R1T has five different ride heights with a maximum of 14.5 inches of ground clearance. That means it has an approach angle of 34.8 degrees, a departure angle of 29.3 degrees and a breakover angle of 25.7 degrees. That's better off-road geometry than a Ford F-150 Raptor or even the new Ram 1500 TRX. Heck, the breakover and departure angles are even better than the Jeep Gladiator Rubicon. That in mind, even at the Level 4 height, it's rare that I actually hit any rocks or damage the underbody protection -- which, thanks to the flat-pack powertrain, is like a skateboard deck under the truck.

This skateboard platform and the lack of a traditional powertrain means the Rivian has a ridiculous amount of storage. Sure, the bed is only 4.5 feet long, but I have 11.1 cubic feet of space in the front trunk, enough for sleeping bags, a cot, pillows, three lengths of Bubba Rope, winter jackets, two packs of Muscle Milk and one 12-pack of Diet Dr. Pepper -- with room to spare. A tunnel between the rear seats and the bed can hold an additional 11.7 cubic feet of gear. This space is great for additional Maxtrax and my personal bags. What's extra cool is that, once the tunnel door on either side is flipped down, it functions as a seat or as a step to access the bed or the roof rack. This is genius, and honestly might be my favorite thing about the R1T.

If you've never had 826 lb.-ft. of instant, electric torque under your right foot, I can solidly say that you haven't lived. The R1T might not have locking differentials, a two-speed transfer case or any kind of tough-guy wizardry you'd associate with off-road prowess, but none of that matters when you've got an absolute ton of torque. I can slowly pick my line up a steep, rocky hill, never worrying about keeping momentum. The sophisticated traction control system moves the torque where it's needed most, and before I know it, the R1T hits the top of a peak while the Jeeps behind me are still switching into low gear.

Of course, that torque is only useful if you've got the traction to put it to the pavement -- or, in my case, the dirt. It's super easy to spin the tires, meaning it's also super easy to get dug in and stuck in the softer, hotter sand of Glamis, California, home to North America's largest dunes.

When that happens, I have to air the Rivian's tires down to 22 psi and remove as much weight as possible from the truck. Spares? Gone. Tool box, jack, parts and camping gear? Vamoose. The problem, though, is that the soft sand and low tire pressure kills my range -- I'm getting about 50 miles per charge in the dunes. That's thanks to the incredible power needed to get through this kind of sand, not to mention the intense heat. This isn't just a problem for EVs; gas-powered vehicles are significantly less efficient in the dunes, too.

Still, the Rivian is a total champ when the going gets tough. Taking a stab at Oldsmobile Hill, one of the steepest climbs in Glamis, I make it all 275 feet or so to the top. That's an incredible feat for any vehicle on this 27-degree, sandy climb. I've never made it to the top of Oldsmobile in a stock vehicle before.

My success here is mostly thanks to the Rivian's torque, but the truck's suspension gets a lot of credit, too. The bottom of the hill is plagued with whoops, and I have to carry speed to ensure I stay on top of the sand. However, it's a balance: Go too slow and I'll likely dig myself in once I really hit the throttle, but go too fast and I might break something. In Level 4, the air suspension is programmed to have great compression, keeping the truck from bottoming out on those whoops. I'd like a little less rebound to keep the R1T from kicking up just a bit, but it's still good enough to keep on top of the sand over the initial whoops, allowing me to speed up to the top of the hill once the sand smooths out.

It's worth mentioning that I'm usually a little wary of air suspensions during serious off-roading as I've seen them fail out in the wild more than once. But Rivian's done a great job here. Full disclosure, though: Attacking some whoops a little too fast results in me bending a rear control link. Rivian assures me this truck has preproduction parts that aren't fully dialed in, though. Swapping the part out takes less than two hours.

By now you're probably wondering how I managed to drive an electric truck off-road for a week and keep it charged. That's where Power Innovations comes in. Known for its ability to provide power in way-out places, Power Innovations has a semi truck that it calls Mobile Energy Command. Here, I'm able to charge at speeds up to 130 kW, which is almost three times as fast as most public charging stations. On average, I'm able to regain 80% of the Rivian's battery capacity in about 30 minutes. But because batteries take longer to charge the fuller they are, it's the last 20% that takes some time. Getting the full 100% takes over an hour.

Yes, I realize that Rivian drivers will not have a semi truck full of batteries following them around the desert for charging, but the automaker is planning to release its own charging infrastructure, called the Rivian Adventure Network. A quick search on plugshare.com shows that there are CCS charging stations near off-roading hot spots in California like Pismo Beach, Barstow, Lone Pine and Baker, as well as Las Vegas, Nevada.

Another cool thing: The Rivian R1T can be tow charged. You'll never be out in the desert wheeling alone, right? If the truck runs out of juice, you can pull it behind another vehicle and pump some energy back into the battery.

Rivian notes there's still some work to be done before the R1T hits the road next year, and my truck is not without its preproduction foibles. (Ask my co-pilot about when her seat heater randomly turned on in the middle of a 100-degree day.) But this thing easily survived eight days of intense off-roading, through tough dirt and dunes. Even when running at 38 psi over rocks, the stock Pirelli Scorpion tires never let me down, and I never once got a flat.

The Rivian R1T has some mighty strong bones. And if it's this good through the toughest terrain, the fully fleshed-out production model should be nothing short of a game-changer.

· Registered
Joined Feb 17, 2019
·
2,718 Posts
Some key takeaways from this review:
Also, it turns out that Emme had a battery pack with 75% the capacity of what production versions will have.

That info came directly from Rivian:

Update: Rivian reached out to us with an update to the story, including the following information:

"Emme wasn’t using a production battery pack. Hers had about 75% of production capacity. According to our engineers (who took data from Emme’s drive in real time), someone driving a production vehicle in Emme’s shoes would experience an overall range average of about 220 miles of range a day were they living her experience with their production R1T. And yes, we included the sand!"