Jeff Bezos’ trip to space was a commercial for Rivian

Jump to Latest
JimmyEV
As over the top Jeff Bezos' space flight was, it did serve a purpose as far as Rivian is concerned, to advertise their vehicles to as many people as possible. 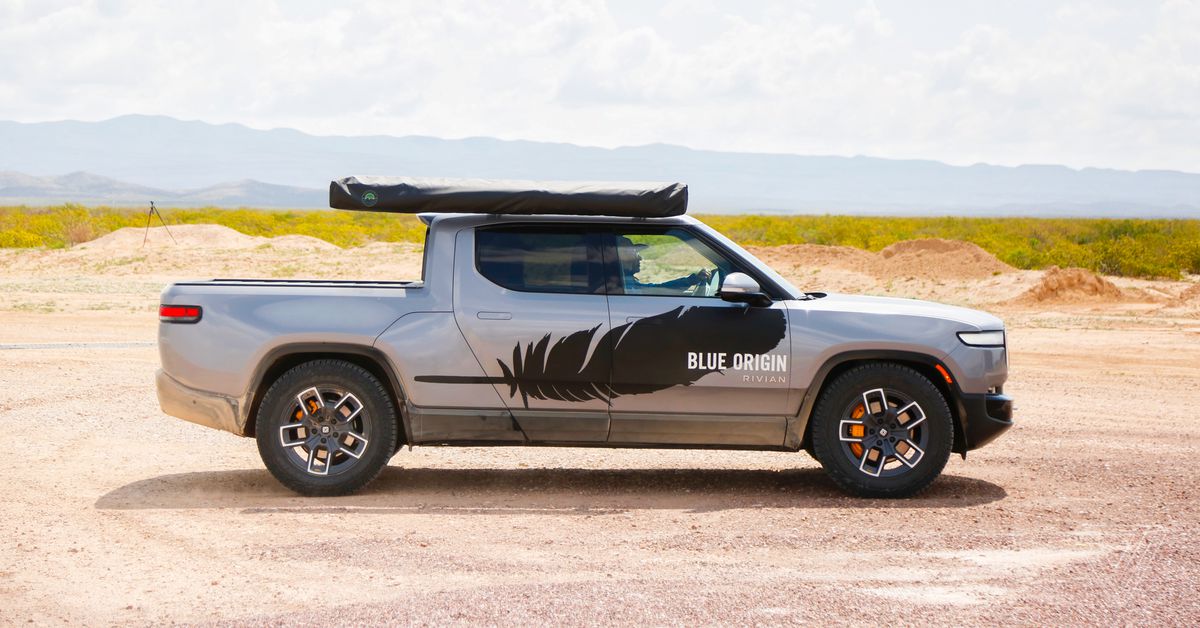 The crew rode in Rivian’s EVs before and after launch.

After years of preparation and billions of dollars spent on the project, Amazon founder Jeff Bezos got to be one of the first people to ride a rocket built by his other company, Blue Origin, to the edge of space. But the event itself was also a chance for Bezos to promote a third investment in the wider Amazon portfolio: EV startup Rivian.

Throughout the broadcast, Rivian’s electric pickup truck and SUV could be seen shuttling Bezos and his fellow astronauts around — an unsurprising decision considering Amazon now owns more than 10 percent of the EV startup after leading and participating in multiple funding rounds. The hosts of Blue Origin’s livestream made sure to let everyone watching know what they were seeing, too.

"And here the astronauts come. There you see Jeff Bezos in the foreground, Oliver Daemen stepping into the Rivian,” Ariane Cornell, Blue Origin’s director of “astronaut and orbital sales,” cheerily said during the broadcast as the group hopped in one of the startup’s SUVs to head to the rocket for their ride to space. Then we got a long, continuous aerial shot of the electric SUV driving toward the pad, split side-by-side during an interview with Mercury 13 legend Wally Funk.

After the crew safely landed an hour later, there they were again: a set of Rivian pickups and SUVs rumbling over the West Texas landscape to greet the recently returned astronauts. (The electric vehicles were tucked in among a few other pickup trucks and SUVs made by Ford — which also owns more than 10 percent of Rivian.)

The Rivians — likely on loan, due to the fact that they’re still wearing manufacturer plates — weren’t just there for the sake of the broadcast, either. At one point, Blue Origin used the slide-out camping kitchen on a pair of Rivian pickups to cook up sausages and carne asada for guests attending the launch — an optional feature that the startup has promoted a lot in the run-up to production.

Blue Origin is a private company, and much like Virgin Galactic — which launched founder Richard Branson to the edge of space less than two weeks ago — this first mission was as much about promotion as it was about science or exploration. But while Branson’s event had a music festival vibe, Blue Origin’s was more in line with Bezos’ notorious calculation. It was a chance for him to promote the things he plans to spend his time on now that he’s no longer Amazon CEO, like his space company and his climate fund, and to toss a bone to the electric vehicle company that Amazon has dumped a bunch of money into. Perhaps the only surprising thing is that the delivery van Rivian is building for Amazon wasn’t there, too.

It’s not like Rivian, which recently delayed the first deliveries of its pickup truck and SUV to later this year, really needs the attention. The startup has already raised more than $8 billion to date. Rivian has also already proven adept at coming up with its own effective cross-promotions. But Rivian is currently in the process of preparing an initial public offering, so it’s possible this display of corporate synergy plays right into the hands of the bankers.

The commercialization of the space industry has been happening for a while, but it’s really ramped up in recent years as companies like Blue Origin, Virgin Galactic, and Elon Musk’s SpaceX matured. These companies have set out to dominate everything from the “boring” tasks like cargo runs and science missions to the riskier endeavors like strapping people inside a spaceship. They’ve realized the value of the eyeballs these missions attract, too. After all, before SpaceX launched the first humans to space from United States soil last year, those astronauts also took a promotional ride to the rocket — in a Tesla Model X.

· Registered
Joined Dec 11, 2020
·
37 Posts
Thanks for sharing. That canopy looks awesome. And of course now I want the camp kitchen too. Well done Rivian, I'll take one of everything!
L

· Registered
Joined Jun 8, 2021
·
16 Posts
The canopy does look good. This is the first time I've seen it. Anyone know if this will be an available option or an after market item?
M

Larry I said:
The canopy does look good. This is the first time I've seen it. Anyone know if this will be an available option or an after market item?
Click to expand...

I believe it's an Overland:

Our OVS Nomadic awnings is the sturdiest awnings available. Our 270 features oversized heavy duty rafters and can be used without supporting poles. See all our awning options

About this Article
2 likes
4 Replies
Written By: