In addition to the EF1-T, the company is planning an electric van based on the same platform they're calling the EF1-V. 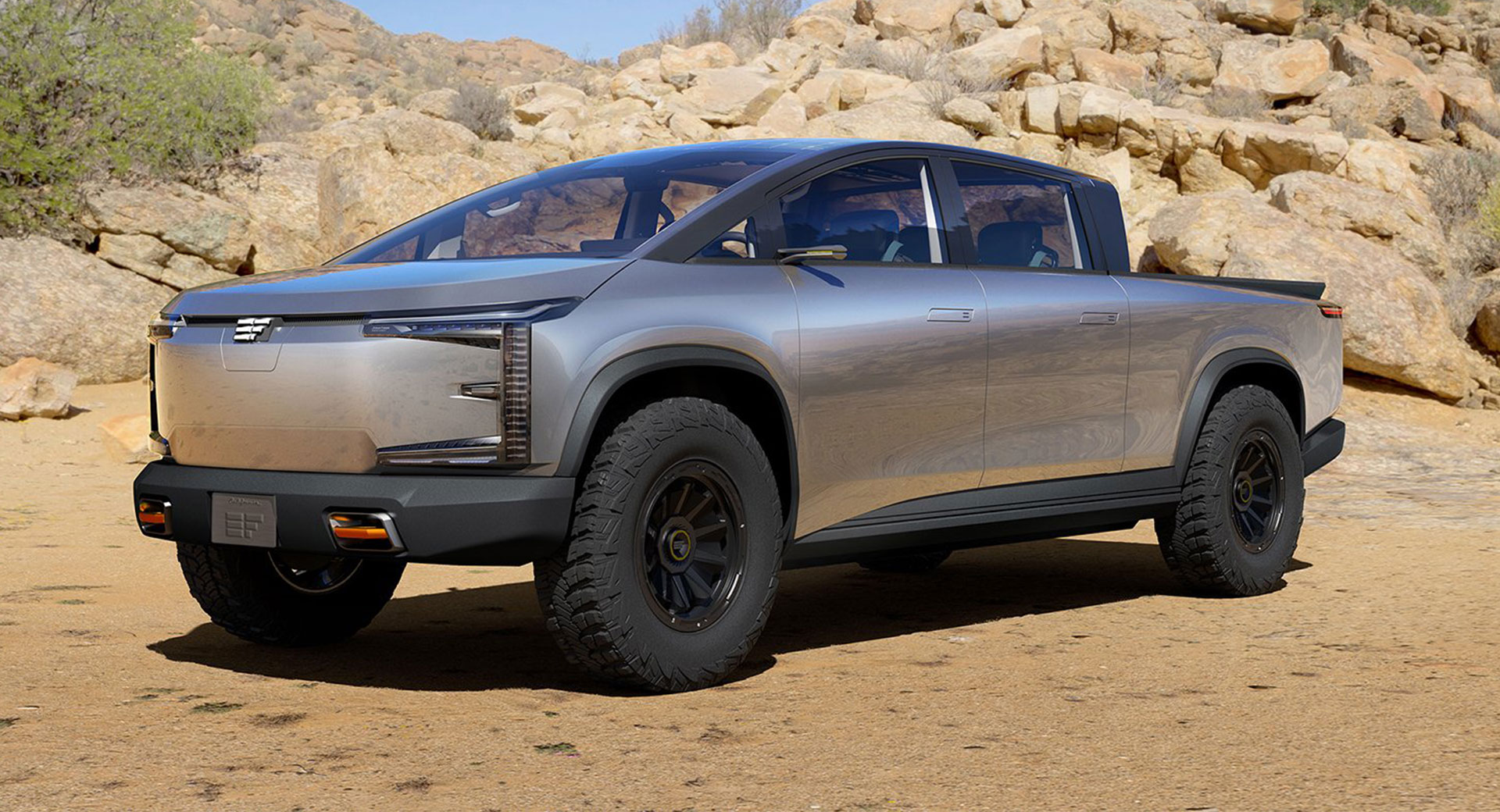 The all-electric EF1-T will be available in three configurations with either one, two, or three motors

This time I think it's Tesla FTW!

Wow... soooo many trucks for sale (CT, R1T,Lightning, this thing), but no one has any to deliver. Someone should actually start MAKING trucks for customers.

NY_Rob said:
Hmmmmm.... Edison vs. Tesla, something awfully familiar about that

This time I think it's Tesla FTW!

Wow... soooo many trucks for sale (CT, R1T,Lightning, this thing), but no one has any to deliver. Someone should actually start MAKING trucks for customers.
Click to expand...

I like the use of solar panels on the roof, bed cover, and dashboard.

· Registered
Joined Feb 17, 2019
·
2,718 Posts
Cool but I wish it looked less like a Cybertruck. Whatever happened to being original?
J

· Registered
Joined Feb 14, 2021
·
117 Posts
Looks like they are going for 6 passengers with the middle seat in the front. I like how the solar cells are built in.
It will probably be several years before it comes to market, if at all. There are a lot of competitors (Atlis, Bollinger, Lordstown, Nikola, etc...) that will be fighting for scraps after Rivian, Ford, GM and Tesla in the EV truck market.
T

TessP100D said:
A lot of room for improvement here… but at least they have a real steering wheel.
Click to expand...

MKBHD likes the yoke and I think his take holds a lot of weight. 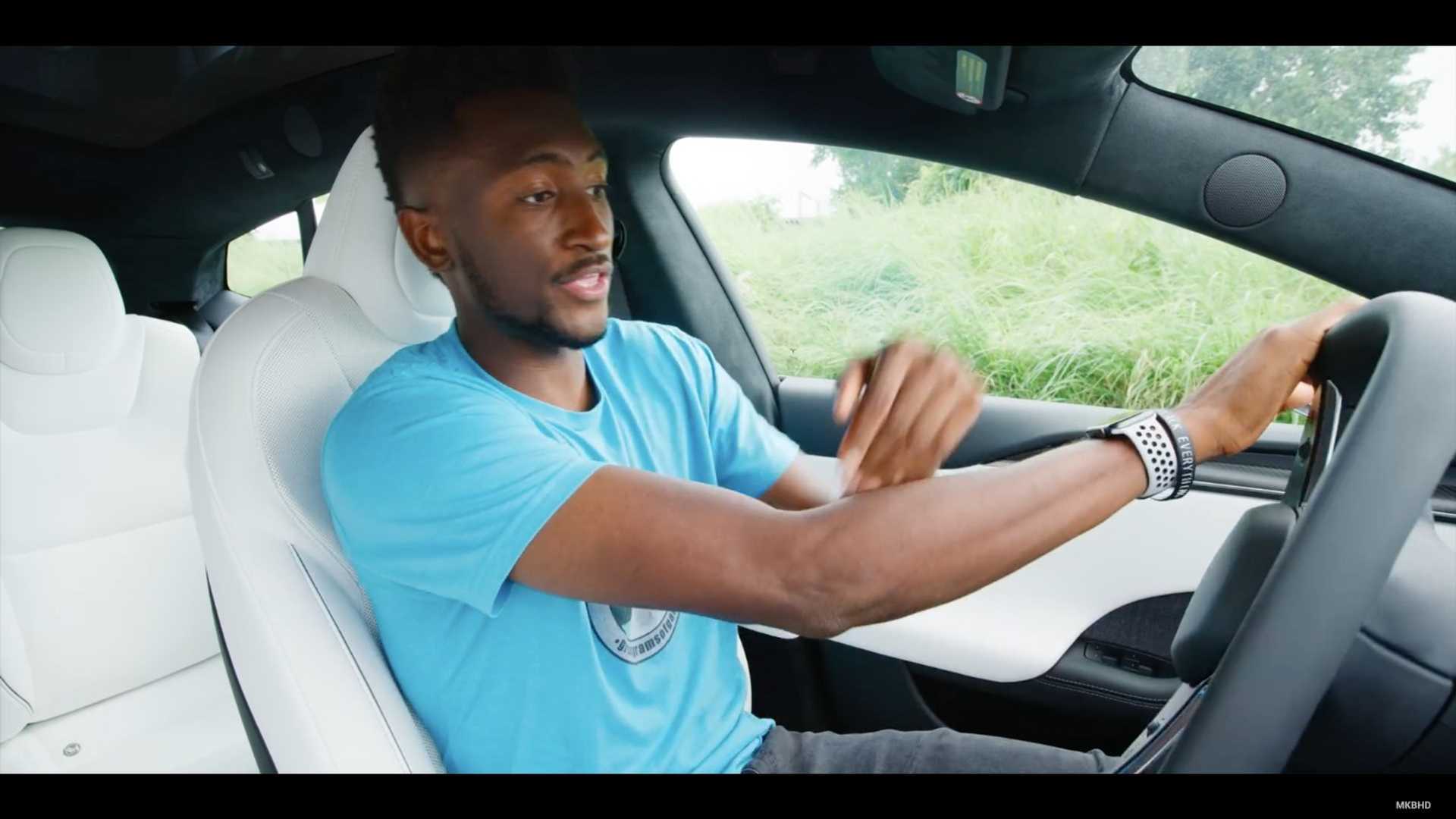 Marques Brownlee Now Loves The Yoke, Would Not Switch To Normal Wheel

Tech reviewer Marques Brownlee has completely gotten used to the yoke, "to the point where if given an option to switch to a normal wheel, I wouldn’t take it."

· Registered
Joined Jun 4, 2019
·
1,776 Posts
Motor Trend wrote a first look piece on the Edison EF1-T and EF1-V. On paper it's interesting but there's so much stuff that has to go right for them to get to market in the next couple of years.

Should the Hummer EV, Rivian, Lightning, Silverado EV, and Cybertruck be worried about these 700-hp EVs?

EdisonFuture, a California-based startup, is looking to cash in on the e-pickup craze by launching an F-150-sized light-duty full-size electric truck of its own, powered by a range of battery and motor options that includes a 450-mile battery pack and a three-motor configuration good for a reported 700 combined horsepower. Should the legacy and better-established newcomers to this space be worried?

What The Heck Is EdisonFuture?
This subsidiary of SPI Energy used to be aligned with another spinoff called Phoenix Motorcars. That group made a business of retrofitting Ford medium-duty trucks to electric power.

But don't let this fact—and the resemblance of its steel wheels to those of a Ford F-150 XL work truck—lead you to presume this is another modified Ford. EdisonFuture VP of product management Edmund Shen assures us the EF1-T pickup and its van counterpart, the EF1-V are both engineered from scratch by Livermore, California-based EdisonFuture.

Ford F-150-Sized, Not F-150-Based
EdisonFuture sees the heart of the e-pickup market as the traditional half-ton size and capacity. So the EF1-T's dimensions and mission don't stray far from the perennial best-selling F-150 and its Lightning electric variant, though it's proportioned more like the forthcoming 2024 Chevrolet Silverado EV—that is, with a shorter "dash to axle" in front, a roomy four-door crew cab, and a 6.5- or 8-foot bed. (Exact body dimensions have yet to be released.)

In person, the flat nose and primary headlamp details are more reminiscent of Chevy's electric pickup, while the continuation of the LED lights to form a C-clamp look resembles an F-series Super Duty. Remember, though—it's not a Ford!

Three Drive Configurations, Multiple Batteries
EdisonFuture plans to cover the market much like Chevrolet and Hummer EV, with offerings ranging from rear-wheel-drive, single-motor to dual- and tri-motor all-wheel-drive setups. Likewise, there will be a choice of battery pack sizes available to suit various budgets and expectations. To date we only know that the single motor version will accelerate to 60 mph in 6.5 seconds. The two-motor version will produce about 600 hp and be good for 0-60 mph in 4.5 seconds. The three-motor version will produce 700 hp and drop the 60-mph time to 3.9 seconds. EF1-V van models will only offer rear or two-motor all-wheel drive, each of which is rated to hit 60 mph in 6.5 seconds.

These will be permanent-magnet motors, and we're told one or more may be clutched, allowing them to idle when not needed during cruising. There's no word yet on battery sizes, but the base truck is said to be good for 300 miles, the two-motor one will go 380 miles, and the top model can cover 450 miles on a charge. A DC fast charge will bring the battery from 0 to 80 percent charge in 25 minutes.

Aero Sleek, With An Optional Solar Roof
The "SPI" in the parent company's name stands for Solar Power Innovations, so it should come as no surprise that EdisonFuture will offer a solar roof option on both the truck and van leveraging SPI Energy's latest photovoltaic solar cells. Each will have a similar solar-collecting surface area, and in southern California sunshine we're told it should be capable of adding 15-25 miles of range on a sunny day.

Three-Seat Front Bench, Two- Or Three-Row Van Seating
Both models displayed at CES 2022—a high-spec pickup and low-spec van—featured a roomy three-seat bench in front. The EF1-V van on display was built for cargo-schlepping fleet duty, showing the lowest of three roof heights. This one is more consumer focused and hence designed to fit comfortably in residential garages, but we're told the highest roof will allow a person to stand in the back (given the height of the floor, that'll be a tall van).

Passenger-oriented versions with windows will feature a choice of two or three rows of seating. The van can be configured to carry 260 to 400 cubic feet of cargo and features sliding doors on either side with "barn doors" in the rear.

Pickup Cab And Box Features
A 17.5-inch floating touchscreen controls all the infotainment features, the long dash surface provides extra solar cells, when so equipped, and the doors can be equipped with removable toolboxes. Side view mirror images are supplied via camera and displayed on dedicated screens located near the A-pillars. A full set of tie-down points is provided in the box, along with what looks like provision for a gooseneck or fifth-wheel trailer hitch.

Towing Capacity
The EF1-T Standard model with a single rear motor is rated to tow 7,500 pounds, the EF1-TP premium two-motor variant can do 9,000, and the top EF1-TS Super tri-motor range topper is good for 11,000 pounds. For the EF1-V van, rear-drive models can tow 7,500 pounds, two-motor AWD long-range models are rated for 8,000 pounds.

So Should The Others Worry?
Competition is competition—unless or until it isn't. Funding could run out, investors may lose their nerve, the executive suite might get raided, or any of a million other potential pitfalls could darken EdisonFuture's, future. But the truck looks intriguing and the initial specs are promising, so we wish the new venture luck.
N

· Registered
Joined Oct 2, 2021
·
510 Posts
First thing that will be dropped on the production model (if they ever make it that far) is going to be the solar bed cover followed by the solar dash then the huge (super expensive) tires, followed by the side view cameras being replaced by mirrors,..... etc....

But at least his truck has windshield wipers

· Premium Member
Joined May 24, 2021
·
86 Posts
I just visited this website after some time. Looks they are starting to take order reservations for a 2025 availability, for $200. Fully refundable of course. They are still listing the 3 trim levels, single-, dual-, and tri- motor. The site suggests that the solar bed cover is now optional.
I'm not sure how long reservations have been open, likely not long, as the payment processing on the site was not working yet.
Interesting concept for a truck....we'll see how this goes!
1 - 13 of 13 Posts

About this Article
1 likes
12 Replies
Written By: