Toyota Files Patent for its own Tank Turn

At least once a year, Toyota pulls up with a patent application that makes us go, "Oh!" In 2018 the automaker submitted paperwork for what could be considered a flying car or a driveable drone. In 2019, we found a patent app for an in-car fragrance system that can pipe teargas into the vehicle if the car detects an illegitimate engine start. In the running this year, Cybertruck Talk found a filing with the U.S. Patent and Trademark Office (USPTO) for novel turn indicators on a vehicle that can drive at an angle (on purpose), drive sideways, such as into a parallel parking spot, and perform a 180-in-place — a la the Rivian "Tank Turn." The application appears to be part of a trove of Japanese patent filings that Toyota is feeding through the U.S. system, the name of this patent being titled "Vehicle." But the patent isn't for a vehicle, it focuses on "a directional indication system" that will let other road or trail users and passers-by know that the car is about to do something unorthodox, like flip its wheels sideways and roll to the curb.

As with the Rivian, the vehicle in the patent app fits a motor for each wheel. Unlike Rivian, the Toyota doesn't countersteer opposite sides to achieve rotation-in-place. The wheel hubs are mounted on arms that can rotate 180 degrees inside the wheel arch. When the wheels turn, the wheels stick partially out of the wheel well. But with this setup, in the case of steering, for example, during a left turn, the left front wheel would rotate rearward into the wheel arch, the right front wheel would rotate forward into the wheel arch. To rotate in place, the front wheels toe in 45 degrees, the rear wheels toe out 45 degrees.

Realizing this will make the vehicle look broken to pedestrians or fellow shoppers in the grocery store lot, Toyota's actually interested in how to let gawkers know to stay out of the way. A potential solution would be eight individual lights on the rear fascia, four on the left and four on the right, acting as traditional taillights in normal circumstances. When the vehicle is about to move sideways to the right, perpendicular to the apparent direction of travel, the eight rear lights would flash from the furthest on the left to the furthest on the right, the same way one sees on an illuminated sign in a construction zone. Additional mooted solutions include turns signals that wrap around the corners of the vehicle, a text display explaining what the vehicle is about to do and illuminated wheel arches, all of which could be accompanied by an audio warning. The Morse code starts to get confusing with oblique travel, making it clear that observers will need to learn how to translate our willy-nilly directional future.

We suspect there's as much chance of seeing this any time soon as there is of getting teargassed in a Camry at Whole Foods, but who knows — if Rivians are found to be gathering for choreographed pirouettes all over the trails, Toyota has its answer ready. 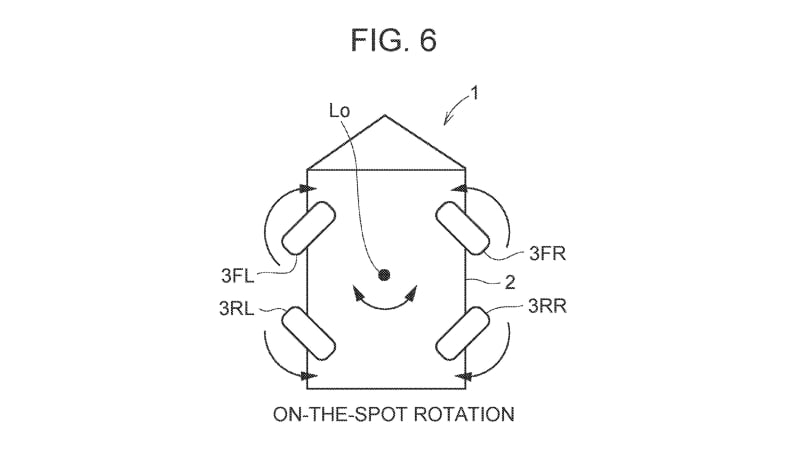 Toyota patented a turn indicator system that would be used by cars that can drive sideways or spin 360 degrees in place.